Dragon’s Chase
by Mina Carter
Paranormal Romance
Tour by: N K Author Services
He’s found his mate. But can he convince her that he’s her man?
Working for the Paranormal Protection Agency has never been boring, but shadow-dragon Duke didn’t expect to meet his mate in the line of duty. He certainly didn’t expect a warrior every inch his match, or for her to slap him across the ass with her tail and take off across the city.
With Baron on a very personal protection detail, Duke has to fly solo on the pair’s investigation into the warlock who nearly killed Baron’s mate. Just one problem, his mate is working with the warlock. So, dead or alive, he has to bring her in…
She found the one thing she didn’t want. Her mate. Now she needs to get rid of him before he ruins her mission…
Sleeping for centuries has it’s drawbacks, Chase knew that going in. What she didn’t expect was to wake with a Warlock’s spelled collar around her neck and to find her charge, the Queen’s daughter, in a cage. Vowing to free them both will take skill and strength and she doesn’t need the distraction of a hot as hell male dragon trying to make his claim on her. Even though her heart aches to complete their joining, she can’t. Not yet.
The mission, or her heart. Can she have both? Or will she need one to complete the other?
Get the other Paranormal Protection Agency books here:
Paranormal Protection Agency: Volume 1 $3.99
Dragon’s Honor (Paranormal Protection Agency) $2.99

DRAGON’S CHASE (PARANORMAL PROTECTION AGENCY BK7)
WRITTEN BY: MINA CARTER
REVIEWED BY: APRIL EPLEY
Okay first things first, this is a read for 18+ please due to hot steamy scenes. This book bounces between 2 POVs and it was well done. This was my first read in this series and this book works fine as a stand-alone novel. You will not feel lost and confused. I liked it so much now I really need to go back and buy the other books in this series to get more of my paranormal fix.
Duke is wonderful! He is a dragon shifter and thinks he and his twin brother are some of the very few left. He is a Shadow Dragon and also works for the Paranormal Protection Agency. He takes out his  frustrations on the icky red caps and I found it wonderful! During work and trying to take down an evil Dracos by the name of Sellers, Duke glimpses his mate. Wow he did not expect to feel like he did and find her where he did. Before he knows it she is gone. Now his mind is filled with her yet he needs to concentrate on work also!
Chase has been collared by an evil that she has no choice but to obey. She is part of the Queens guard, what is left of it. It is her duty to protect Baby, even if it means doing things she does not want to. She is constantly looking for the answers to rid herself of the dreaded slavery she finds herself in. Never did finding a mate cross her mind. Her only thought has ever been to protect Baby. Why can she not get that dragon out of her head?
Follow Chase and Duke on this adventure that starts off quickly and leaves you reading until the book is finished. Will they survive? Will Baby be safe, or will Chase fail? You will have to read it to find out. I am giving this book 4 solid stars. I will be going to grab up the rest of this series so that I can get some more Paranormal! I really enjoyed it. My only wish was that it had been a bit longer. Well done Mina Carter and thank you.
Meet Mina:
Mina was born and raised in the East Farthing of Middle Earth (otherwise known as the Midlands, England) and spend her childhood learning all the sorts of things generally required of a professional adventurer. Able to ride, box, shoot, make and read maps, make chainmail and use a broadsword (with varying degrees of efficiency) she was disgusted to find that adventuring is not considered a suitable occupation these days.
So, instead of slaying dragons and hunting vampires and the like, Mina spends her days writing about hot shifters, government conspiracies and vampire lords with more than their fair share of RAWR. Turns out wanna-be adventurers have quite the turn of imagination after all…
(But she keeps that sword sharp, just in case the writing career is just a dream and she really *is* an adventurer.)
The boring part: A full time author and cover artist, Mina can usually be found hunched over a keyboard or graphics tablet, frantically trying to get the images and words in her head out and onto the screen before they drive her mad. She’s addicted to coffee and would like to be addicted to chocolate, but unfortunately chocolate dislikes her.
Stalker Links:
Website: http://mina-carter.com
Facebook Profile: http://facebook.com/mina.carter
Facebook Page: https://www.facebook.com/minacarterauthor
Twitter: http://twitter.com/minacarter
Amazon Author Page: http://www.amazon.com/Mina-Carter/e/B002BOH5R4/
Goodreads: http://www.goodreads.com/author/show/2920063.Mina_Carter
Pinterest: http://pinterest.com/minacarter77
Mina’s other titles: Amazon Books
AMAZON BUY LINK 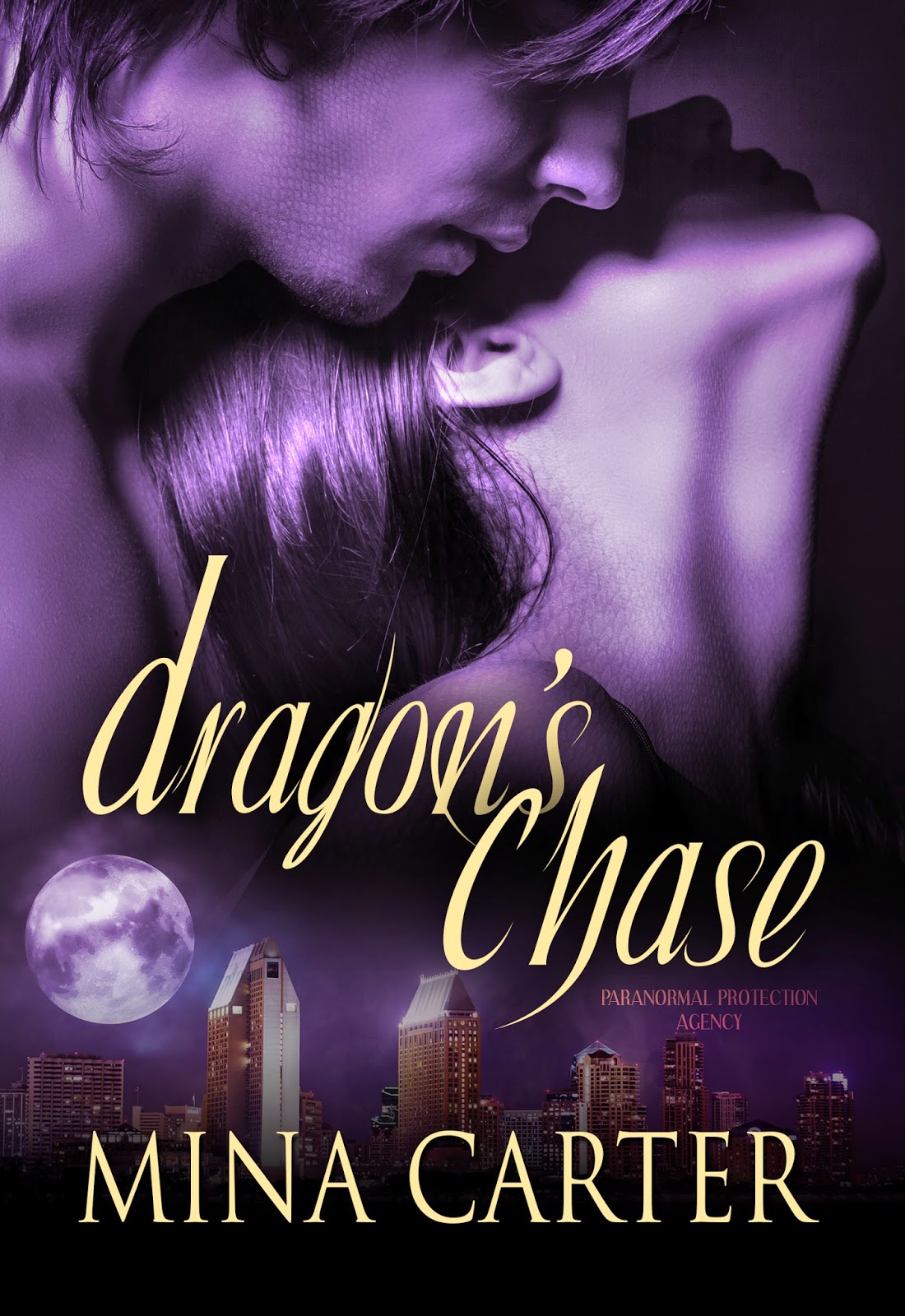 Excerpt:
Dragon’s Chase Excerpt © 2014 Mina Carter
Some dragons had all the luck.
Tucking a strand of hair the wind had blown across his face behind one ear, Duke watched his brother helping a diminutive female—his new mate, Honor Croft—into a waiting cab.
Testament to the heavy shit that had just gone down, events that included a horde of Red Caps and a crazed warlock trying to kill the girl the PPA had been paid to protect, heavily armed guards surrounded the vehicle, watching everything around them closely. As a group, they breathed a sigh of relief when Baron slid into the vehicle next to his mate and shut the door. As experienced as all the guards were, they were still a little wary of the big dragon. They were around both brothers.
Duke paid them no mind, transferring his attention back to the new couple, just visible through the windows of the cab. His brother was one lucky bastard. Not only had he saved the day, but he’d gotten the girl as well.
Finding their soul mates had been on both brothers’ minds since they understood the difference between little girl and little boy dragons and now Baron had found his. He could hold her in his arms, keep her safe, and Duke was as jealous as all hell.
Of course, Baron would probably have appreciated not dying first. Duke sure as fuck would have preferred not to watch his brother breathe his last breath, broken body bleeding out onto the concrete beneath his feet. But true love conquered all…. That’s what they said, and the gamble Duke had taken when he’d made Honor eat the rarest ‘diamond’ in existence; a Dragon’s Tear.
It had worked, the lucky son of a bitch had been healed and now Baron and Honor were on their way to a safe-house where Honor could be protected. And practice making little baby shadow-dragons if the twinkle in Baron’s eye was anything to go by. Which left Duke to track down the murderous bastard who had tried to kill his brother’s mate, and find the she-dragon who had taunted and teased him until he didn’t know up from down.
A she-dragon. His mate. He’d been so surprised that he’d almost fallen out of the sky. Then she’d slapped him across the ass with her tail and run away….
Duke’s lips compressed into a thin line. Oh, she’d pay for that. He just had to find her first.
Crouching, he gathered the energy within himself, holding it deep inside as a rolling mass of chaos. It built, simmering like inferno-heated champagne as the bubbles tried to escape at high velocity. His scales tried to push through his skin, and his bones ached with the pressure of holding the change back. With a roar he leapt into the air and let it all go. His dragon-form exploded out from his body like some nightmare-inducing jack in the box.
The roar deepened as his throat changed, and he snapped his wings out to their full spread. A soft click sounded deep in his throat a second before a gout of flame lit the night sky. Beating his wings, he took no more than a few seconds to reach the top of the Croft building. He circled it, using the tiniest of air currents to glide in a graceful loop.
Guards scurried over the roof, looking like ants to his non-human vision. Heat rose from them, bringing the scent of blood and soft flesh to his nostrils. Instinctively his mouth watered. So soft and crunchy…most humanoids made great snacks.
As if sensing his thoughts, the guard on the corner turned and looked at him, his eyes flashing amber in warning as an earthy scent hit Duke’s nostrils. Werewolf then. Yeah, not so good if the snack was more than capable of clawing its way out of your belly through your ribcage. Talk about aggressive indigestion.
Movement at the corner of his eye got his attention. Turning his head, Duke spotted Iliona—his boss— motioning him to land. He lifted his wing and banked sharply in mid-air, scattering the guards below. Heavy wing-beats kept him hovering in the air just above the human woman, her arms folded and hair whipping about her face as she waited for him to land.
The instant he touched down with a claw, he called the change and folded his dragon-form neatly back within the man. A roll of his neck reset the shirt across his shoulders, his clothes thankfully reappearing when he made the change back to human, and he took the last few steps to stand in front the Paranormal Protection Agency’s head honcho.
As always, she wore a smart business suit. No skirt this time, but pants, and her jacket hung open. Two things caught Duke’s attention. The ornate pendant at her throat pulsed with power, pulling at the dragon part of him. Pretty and powerful, such a trinket was everything the creature loved and his fingers itched with the need to reach out and touch it. He resisted, curled them into fists at his side as he flicked a glance down at the Glock in the holster playing peekaboo through the open edges of her jacket. The fact that she packed heat to match the sheathed knife the other side made him blink. It was serious when the boss came out on site fully armed…